Christina and Alex Karlsson lived in a small red cottage between two big maple trees along the road down to Käringsund. The farm had been owned by the same family since the 1700s when Alex's ancestors bougth a small piece of land there. Christina was a homemaker and Alex worked as a steward on big ocean ships. They had a dream of spending more time together and therefore they decided to start a tourist hotel in the beginning of the 1960s, around the same time as the regular ferry traffic was started in Åland.

The tourist hotel soon became well-known and popular among visitors, and the same applied to Alex cooking skills. He became famous for his culinary skillis onboard ships. Alex had started his career already at the age of 12 when he with a matress under his arm headed for the harbour and signed on a sketch at Käringsund harbour. In the beginning of the 1960s the dream came true - he became the owner of a tourist hotel.

Today Christina and Alex are no longer there, and neither is the red old cottage where they used to live. But the two maple trees are still there and between them there is the tourist hotel, today Eckerö Hotel & Restaurant. In 1974 their son Ronald (Ronny) Karlsson took over the business and runs it together with his wife Sirpa. They have just started their 40th season, so there's been a lot of water under the bridge. If one would write down all the things that have happened during these years it would make several novels. Here are some examples: 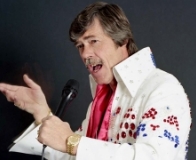 Experience Elvis - the King, loved by millions around the world! There are many who have tried to imitate him and at Eckerö Hotel exists one of the better ones!